Finland is dealing with the same challenges like other countries: where to find talents and how to match the right skill-set with the right positions. Barona's seminar on Wednesday 11th December brought up concrete examples of how local international talent can be matched, what attracts foreign talent and that the successful cross-border recruitment and relocation is actually a family matter. If foreign worker is happy both at work and at home, she or he is more likely to to stay here permanently and be part of Finnish society. The tools for welcoming the newcomers are basically very simple because the change is already happening in Finnish companies and international recruitment is nowadays more common than ever.

Barona's CEO Minna Vanhala-Harmanen started the seminar by bringing out some hard facts about Finnish population and how it is aging rapidly and at the same time there are low birth rates. Where to find the workforce for the service sector in the near future or the high-skilled talents for the IT sector? Vanhala-Harmanen's message was clear:

"Talent shortage is not only a Finnish challenge and the competition for top talents is already global and becomes more intense. At the moment we don't have enough population nor the talents in Finland so something needs to be done."

Vanhala-Harmanen reminded about the Swedish way to make changes and presented how much more work permits Sweden had granted in 2019 for senior experts and specialists comparing to Finland. The numbers were 6369 for Sweden and 1652 for Finland.

She also referred to McKinsey study that there will be over 300 00 jobs less by the time 2030 due to the digitalization and AI. Eventually this means the the low level jobs and high level jobs will remain, but a major part of the common office work and middle level jobs disappear. To tackle this evolution, the study suggested that 50 % of people will need new skills to meet today's requirements.

At the end Vanhala-Harmanen asked the audience to spread the word and share their thoughts about the day's topics.

The seminar's first panel discussion had interesting guests, who shared very different backgrounds and first experiences from Finland. Arja Martikainen from Barona IT led the discussion which mainly focused the panelist's own experiences of the Finnish working environment, language and culture and how these could benefit or alienate when recruiting from abroad.

One of the panelist, Andrew Kolokolnikov from Maas Global had both studied and worked in Finland for many years and liked the flat company hierarchy and versatile carrier opportunities. Kolokolnikov, who was originally from Moscow was very proud with his multicultural experience and current workplace and emphasized that

"Any kind of questions can be solved with open communication and human sense regardless the nationalities."

Kolokolnikov also said that anyone can be hired based on his/her skills and specially in the software companies the Finnish language is not the issue.

The other panelist Veronica Gordon from Nordic Investment Bank came to Finland nine years ago when she worked in Nokia and had always felt like very well received. Gordon had always appreciated Finland's security and diverse public services and mentioned that these kind of luxuries did not exist in her home country Argentina. Gordon had always used English as the working language and knew Finnish only "päiväkoti"-level, so the language had been never been the deal breaker for her. She also mentioned that when working in team with people coming different countries

"It is important to respect to each other's cultures."

The last panelist Daniel Rahman from Integrify was born in Finland but had experienced the multicultural environment from his Egyptian father as well as in his own company when hiring international talents. Rahman thought that the Finnish working life was evolving into more multicultural in recent years, especially in the IT, technology and software development companies and people were naturally open-minded for multicultural environment and language matters. He also agreed with the audience comment that though many companies would like to hire English speaking workers - in real life, especially in the public sector, it can be challenging because of the customer expectations.

"We cannot do anything about the Finnish weather but maybe we could somehow support companies when they are hiring international talents", Rahman suggested.

Esa Johnsson from Outotec, Kirsi Korhonen from University of Helsinki and Ilya Mikhalev from Smartly.IO all agreed that the empathy is one of the key elements to the successful relocation and cross-broder recruitments. It is always a big change for a person to have a new job and in this case even a bit of a shock to move to a new country with your family.

Mikhalev told that Smartly.IO hires lot of high-level talents and pays effort also to talent's family and their relocation. Korhonen added that the academic world is generally very mobile and most of the university workers such as teachers and researchers are familiar with multicultural work environment and value a good balance between home and working life. Johnsson like Mikhalev and Korhonen gave examples of WhatsApp-groups, forest mushroom picking trips, language courses and other social opportunities to engage foreign employees and their families.

"You don't have to do huge changes all of sudden, but little changes",

Korhonen said and mentioned "attitude change" and the education for Finnish workers, especially the supervisors, about working in multicultural work environment. Johnsson added that the company policies and all paperwork must be in good shape and also not forgetting the human touch.

The audience challenged the panelists with a question about the international students that already lived in Finland, but after the graduation, were unable to get employed for various reasons.

"University recruitment should be done in a different way and companies should come in the campus areas with specific job openings and take an active role for hiring the students", Mikhalev suggested.

Korhonen and Johnsson also spoke about the training programs and Korhonen encouraged the audience to set the good example for the change they wanted to see in internationalization.

Another audience question concerned the immigrants in Finland that were unemployed or in work positions, where it does not correspond their education or competence. The time was running out, so Velikova promised that talk about these challenges will continue in the upcoming seminars.

The day's last speech was delivered by Melanie Dower from Supercell. She shared her own career path story from New Zealand to Australia and finally to Finland and Supercell. Melanie had many good practical tips on how to welcome foreign employees and families, going through relocation and shortly advised:

"In any company, you don't have to have big budget, just bring people together".

It was obvious that this event was a very successful start to raising awareness and encouraging the discussion about recruiting international talents, relocation and just making Finnish working life more multicultural. The auditorium full of HR and recruiting professionals spent the morning listening to very interesting views and personal experiences about the day's topics and based on the feelings afterwards and the feedback, we at Barona promise to continue the series of this theme. It was happy to see, that Finnish working life is ready for a change in so many ways.

Download the guide below and learn how to find, attract and hire IT talents from outside the Nordic region. 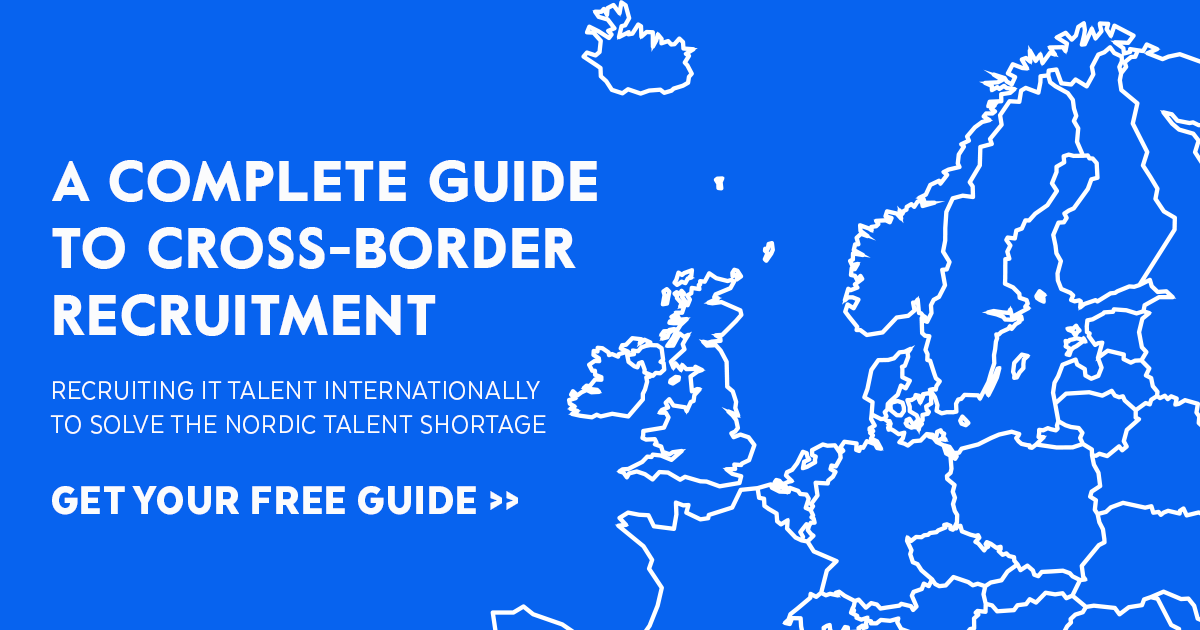